On Tuesday, June 4th, Local Lit @ LOTTA  will feature a poignant odd couple of stories about coupling from the minds of two New Haven area writers:

MICHAIL MULVEY, an adjunct instructor of American literature, holds an MFA in creative writing and has had short stories published in literary magazines and journals in the US, the UK, and Ireland. His work has appeared in such publications as Johnny America, Scholars and Rogues, Prole, The Front Porch Review, The Summerset Review, Roadside Fiction, Literary Orphans, and War, Literature and the Arts. He will read, “Tess is her name,” which paints a portrait of an efficiency and its inhabitants.

CAROLYN LUSCH is a writer, bicyclist, urbanist, mother, and longtime Michigander who moved to New Haven two years ago. Before pursuing urban planning she wrote for The Michigan Daily and Groundcover News, and is an enthusiastic participant in local writing groups wherever she finds them. Carolyn will read “Alexandria’s Baby,” short fiction about a woman’s complicated entanglement with a famous writer.

Local Lit @ LOTTA prizes stories with fresh perspectives, bringing writers and literature fans into discourse over unpublished stories and published ones. A critique, facilitated by a member of the Editorial Board, follows each reading and helps attendees dive into deep discussions about the author’s stylistic choices  In this way, we seek to emphasize and celebrate the process of writing.

We hope to see you next Tuesday at 7 PM on The Range at LOTTA Studio, 911 Whalley Avenue, New Haven 06515.  A suggested donation of $5-10 dollars helps us to maintain the series as a thread in the tapestry of arts events in New Haven. 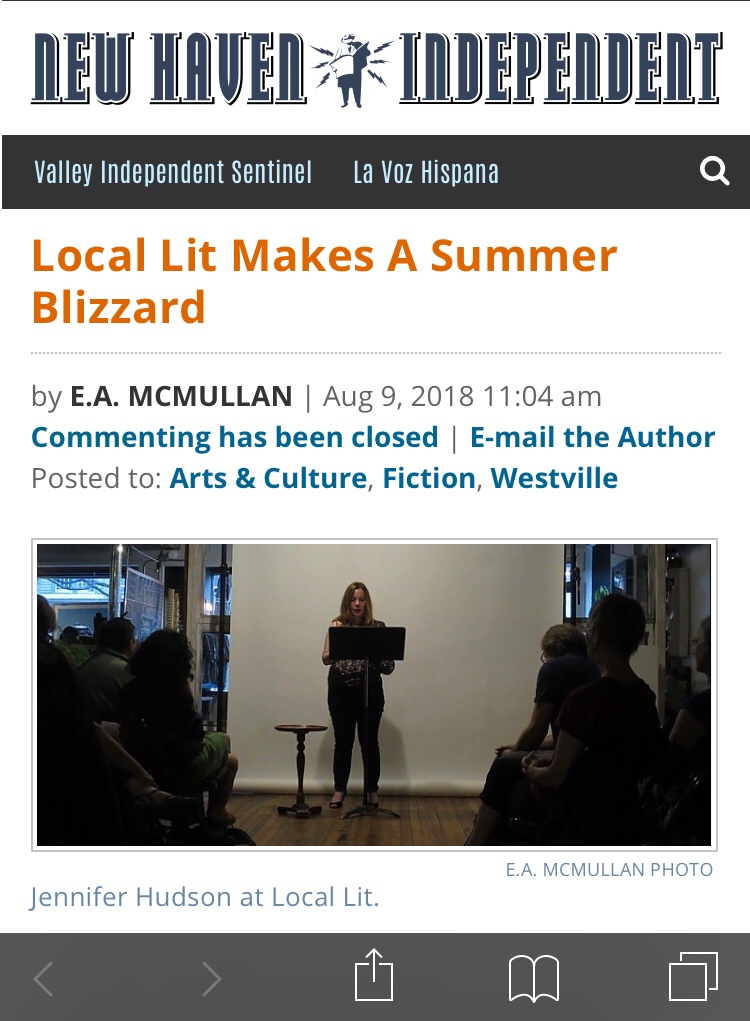 “A winding, narrow road in snowy Pennsylvania, with a curious inn alongside it. A psychiatric hospital in the sticky New York City Summer of 1965. A small family in Poland or Russia, scrambling to finish cooked oil-flecked, gristly angel meat before midnight.” Read more in Lotta Gets Locally Lit by Lucy Gellman for The Arts Paper.

Local Lit @ LOTTA, a bi-monthly literary reading and talk-back series, has announced their first event to be held “on The Range” at LOTTA Studios in Westville, on Tuesday April 3, 7:00 – 9:00 pm.  The series aims to highlight the work of local authors and build a constructive community for and about writing.

The event on April 3rd will feature pieces from the following authors:

Charles Rafferty’s poems and stories have appeared in The New Yorker, O, Oprah Magazine, Prairie Schooner, Ploughshares, The Southern Review and Per Contra.  He won the 2016 NANO Fiction prize, and had a story collection published in 2013 called Saturday Night at Magellan’s. Currently, he directs the MFA program at Albertus Magnus College and teaches at the Westport Writers’ Workshop. His twelfth collection of poems, entitled The Smoke of Horses, was published in 2017.

Annita Sawyer is a clinical psychologist who has practiced in the New Haven area for almost forty years. Her memoir, Smoking Cigarettes, Eating Glass, won the 2013 Santa Fe Writers Project grand prize. The narrative essay to be featured at Local Lit @ LOTTA, adapted from the memoir, was published in the Southern Humanities Review in 2014.

Robert Beech, a psychiatrist at Connecticut Mental Health Center and as-yet unpublished author, has lived in New Haven for the past 20 years. Beech will share a work of short fiction.

Local Lit @ LOTTA will continue hosting literary readings on the first Tuesday of every other month. There is a suggested donation of $5, which includes beverages and light snacks.  Each event features two or more local authors and includes time for the audience, guided by a moderator, to discuss the presented pieces.  While audience members are not required to participate in the discussion, organizer Rebekah Fraser sees the opportunity as a benefit to authors, who often write “in a vacuum” with little or no feedback from people outside their social sphere. “My intention is for Local Lit to become a community-building event for Greater New Haven area writers, where we can connect with other writers and people who enjoy lit.”

The next Local Lit @ LOTTA reading, on June 5th, is now open for submissions. Submission guidelines and other info at http://LocalLitNH.wordpress.com and on Facebook.

on The Range at Lotta Studio